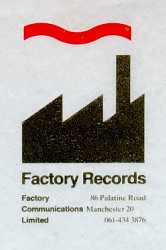 Larry Cassidy, who sadly passed away on Saturday 27th February aged just 57, was one of the two brotherly main-men in the band that time forgot, Section 25, an outfit that astounded, bewildered and influenced fans, musicians and critics alike during their Factory heyday and right up until their recent triumphant album, 'Nature & Degree' (released in 2009). Never a crooner but always a force to be reckoned with, Cassidy leaves behind a legacy that certainly ought to have been discovered by music fans a long, long time ago.

Formed in 1978, the two Cassidys, Larry and Vin plus guitarist Paul Wiggin, hooked up with a local singer for the production of their inaugural Factory Records single, 'Girls Don't Count'. Ian Curtis was so taken with their intense and gritty sound that he devoted time to mixing that first single, partly under the guidance of mentor and head-honcho Tony Wilson. The result was an uncompromising mix of tortured vocals and energy that was to become a staple inclusion in the band's live set-list for years to come, along with its insistent B-sides, 'Up To You' and 'Knew Noise', the latter of which sat side-by-side with the 'Metal Box'-era of John Lydon's Public Image Limited. The glamour of releasing a debut single was surely lost on the band after gluing several hundreds of Saville-designed tracing-paper sleeves, a task which continued as a label-tradition yet, in this case, ended up being awarded to a local home for the blind.

The next Factory release was the landmark 'Always Now', a Martin Hannett-produced set that came presented in the most expensive sleeve ever produced courtesy of Peter Saville, with a fold-out inner sheet and a paper-wax seal - surely an extravagance that would pay off? Not so - the critics were more intent on bemoaning the pricey cover rather than addressing the music within its sleeves. "You can't turn a sow's ear into a silk purse, but you can put it in one", blathered the weekly music press, yet the album stands up today as a major signpost for things to come with its sparse, hollow and dubbed-up tension soon to be tapped up by Editors and Franz Ferdinand on their darker moments.

However, it was to be their 1984 set, 'From The Hip', that would elevate the band to legendary status amongst the so-called Post-Punk fraternity. Recorded with New Order's instruments, studio and Bernard Sumner, the album reached the ears of the States quicker than their home territory, and with the remixed electro-single 'Looking From A Hilltop' (a Peel regular), and acid-tweaked versions of the single 'Beating Heart', Larry and Vincent Cassidy seemed destined for big things. However, fate grounded the band in the UK (band members having a fear of flying etc) and the dance-chart success of 'Hilltop' initially inspired them to complete US tour, but, aside from the gorgeous electro-pop import-single, 'Crazy Wisdom', a record that should have been all over the radio instead of the Human League in my opinion, the band returned the UK penniless and increasingly frustrated with Factory's lax handling of release-dates.

The follow-up album, 'Love and Hate', received the usual Factory nonchalance and delay to its release, caused mainly be a court-case with the risible Jonathan King over the use of a melody line in the single, 'Bad News Week'. It's a tenuous comparison and the whole thing blew over via the MCPS - the single also sank without trace, due in part to a rapid recall to avoid further disapproval from King. Section 25 embarked on a hiatus afterwards that was to last some time. The death of key member and Larry's wife Jenny Cassidy in 2004 created a huge hole in the creative process of the band, not least Larry who doted on her.

Vocally, Larry was never up there with Curtis or Bowie or Bolan but it didn't matter - he was up there with himself, a unique force who drove his band's music forward on stage and in the studio, more recently with his daughter Bethany on board. During the past five years, Section 25 had gone back to basics and released two thoroughly engaging albums in 2007's 'Part-Primitiv' and 2009's 'Nature and Degree', both of them an aural visitation back to the earlier days of punk-ethics and electro-attitudes that many bands wouldn't know how to handle today. Their recent gigs, some with Peter Hook, have been a testimony as to how pulsating and relevant their music can still be some 30 years later, fittingly ring-fenced by a blistering performance in Brussels at the Plan K Factory night in December as reviewed on this site (along with other Section 25 activities). It was to prove to be Larry's final curtain.

Always uncompromising yet an unassuming, thoughtful and intelligent man, Larry Cassidy began a legacy that deserves to continue. There has been and always will be much to glean from the treasures of Blackpool's finest band that hovered above obscurity and almost nudged Britain's sleeping music press awake on a few occasions. It is far too early to speculate on the future, although a remix album, 'Retrofit' was almost 'good-to-go'.

Our thoughts are with his family.

To quote a recent lyric, 'Ring loud and long'. I'm sure he will continue to do so.