Still Spitting, Swearing and Touring After All These Years - A Punk Round-Up for the UK, Spring 2010 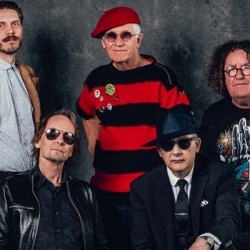 Section 25's Larry Cassidy once said in a documentary made by New Order and Channel 4 (called 'Play At Home'), "You can't be a fookin' punk all yer life can you?" and he may well be right. So while bands from 1977 might well have been disenfranchised with their lot some 30-odd years ago, I imagine their own children are acting exactly the same way with their ex-punk dads (and mums), especially the ones still in a band and still gobbing out the hits and sloganeering like teenagers on a mission. Think I'm way off the mark? Check out the dates coming up for proof that there is life after punk after all.

There are loads of other classic punk bands doing the rounds this year including The Damned who arguably released the very first punk single with 'New Rose' in 1976, just ahead of 'Anarchy In The UK' by the Pistols (although some would argue that the A&M version of 'God Save The Queen' was 'ready to go', until the label baulked at releasing it). Whatever, Dave Vanian and the boys are playing just over a dozen dates from May 17th (Cardiff) right up to June 6th (Newcastle) - expect a mix of the punk and goth era Damned.

The Stranglers are still giving it attitude and are currently embarking on a UK tour, complete with their 70-year old drummer Jet Black (as reported by our very own Patrick recently). The band have hinted that this might be their last run at a tour so disappoint yourself and get to see the 'Meninblack' before it's too late. From the same era we also have The Members who scored a few decent hits with 'Sound Of The Suburbs' and 'Offshore Banking Business'. They play Manchester's Moho on March 29th and for under a tenner!

Speaking of Manchester, the influential Buzzcocks from that very city are back on the road in September when they beat the 'Boredom' in Dundee (9th), Edinburgh (10th) and the excellent looking Durham Punk Fest 2010. The headline gigs are £15 whilst the Durham Fest on September 11th costs £25 for the whole day.

Apart from Buzzcocks, other bands at the Durham Punk Fest include Angelic Upstarts (also playing London's Relentless on April 10th), Discharge (also playing a pile of gigs from April 4th with GBH in Bristol to May 8th in Grimsby, with many dates under a tenner) and UK Subs who are also racking up appearances in Bristol (Mar 25th) and many more until Manchester (Nov 18th), again with many at under a tenner. I mentioned GBH earlier and these charming lads are soon revving it up in style from Mar 6th (Ashton) until April 23rd (Kettering) - I was going to make a pun about how much you'll be 'Charged' - it's under a tenner for a few of them.

Lastly, we have two more legendary early non-English punk bands. Dunfermline's marvelous The Skids may not have been chucking bottles at coppers at every opportunity, but the did write songs befitting a call to peaceful arms. 'Into The Valley', 'Masquerade' and 'Working For The Yankee Dollar' offered up much more than the 'wun choo free for' monotony and you can see them in March in Glasgow (5th), Dunfermline (6th) and Inverness (7th).

Belfast gave us the Jake Burns-fronted Stiff Little Fingers, back in the day, and the 'Alternative Ulster' and 'Suspect Device' composers are back for an extensive pogo-fest in March from the 3rd in Brighton until the 27th in Southend. They're not playing Belfast this time around - I'm sure they will eventually.