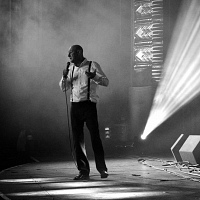 One of the big announcements this week, apart from the BBC's deplorable decision to scrap 6Music, a station that wouldn't have existed without many of the below acts, is that Steve Ignorant from Crass will be playing a limited number of special gigs later this year, starting with the Bristol Academy on Sep 24th and continuing to Birmingham (25th), Manchester (Oct 1st) and Edinburgh (2nd) before crossing the borders of Europe, Japan and USA - then he's due back in London during 2011 (date TBC - we'll let you know, of course).

This quartet of gigs sub-titled 'The Last Supper' will feature a full band performance of Crass gems from 1977 to 1982, a time when Ignorant felt the band were at their most pivotal and important. It is also a swansong of sorts, Ignorant claiming this to be 'a door firmly closed'. The relevance of Crass seems evermore clearer these days - just look at the titles of their key songs such as 'Do They Owe Us A Living?', 'How Does It Feel? (To Be The Mother of a Thousand Dead)' and 'Big A Little A'. How times don't change. Tickets are around £15.