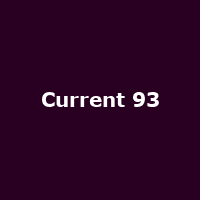 In my mid-twenties I had a penchant for eerie-industrialists, Psychic TV and associated off-shoot bands on the Temple label. The imprint's output was a fusion of disturbed-folk and ritualistic-electronica, normally propelled by samples and sounds from the bowels of Hell. Cheery little bastard, wasn't I?

It gets heavier because my next port of call was the even more unsettling ramblings of the Belgian Crepuscule-offshoot, L.A.Y.L.A.H. Antirecords. The expression 'not well' comes to mind when you see and hear some of the roster and its 'hits' from the mid-80s, such as Laibach's 'Boji/Sila/Brat Moj' EP, Nurse With Wound's 'Brained By Falling Masonry' and the Hafler Trio's pancreatic hurler, 'Seven Hours Sleep'. Trust me on this one, but nothing gets creepier than Current 93's handful of disco-bangers such as 'Dogs Blood Rising', 'Swastikas For Noddy' and their inaugural release, 'LAShTAL'. OK, I will make an exception with the entire Throbbing Gristle catalogue, that IS scary.

Key members David Tibet and Steven Stapleton certainly know how to throw a party, that's if the joys of Paganism, Aleister Crowley, death, mysticism and the occult float your boat. I wasn't too fussed, I just liked the atmosphere of their records, most of which are now worth a small mortgage on eBay these days. If you like Psychic TV, Death In June, Nurse With Wound and Coil, you need to go and see them.

You have the chance to experience some of their later material (a little bit folkier these days), and the odd early track at two very rare and special dates in London at the HMV Forum on May 28th and 29th. Tickets go on sale at 9am on Friday 26th Feb and will cost £39.75.

They last played in the UK in 2008 when Marc Almond appeared on stage with them at the Queen Elizabeth Hall, as well as appearing at the Ether 2007 Festival. Their recent album, 'Aleph At Hallucinatory Mountain' was warmly received by what few reviews it got and these two concerts will no doubt feature some of that set. 2010 marks the 25th anniversary of Current 93 and the 50th birthday of David Tibet and joining in the fun on the 28th will be the irrepressible Nurse With Wound, with Rameses 3 and Comus appearing on the 29th. The latter gig starts earlier at 6pm and there will be different sets played on each night.