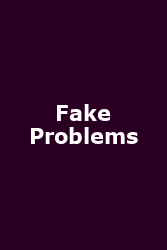 Fake Problems have just announced the cancellation of their April UK tour.

The band from Naples - in Florida, not Italy - were due over here for eleven dates starting on 12th April in Norwich, supported by Sharks (the band, not the sea creatures - that would be odd... but interesting, nonetheless).

The quartet have cited longer than expected recording commitments for their third studio album, stating:

We are sad to announce that our upcoming April tour of the UK has to be postponed. The writing and recording process of our next album has become more demanding than we originally anticipated, and we are committed to making a great record. Unfortunately, that means putting our overseas plans on hold, for now. We will be working out a way to get back to the UK as soon as we can logistically do so. Apologies to Sharks, Tim Williams, the promoters, and anyone who bought a ticket to one of these shows.

At present, no new dates have been announced, so ticket-holders are advised to obtain a refund from your point of purchase.