Dinosaur Jr. Prove They Are No Slackers with May 2010 UK/ Ireland Tour Dates 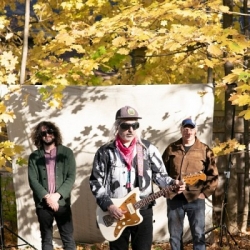 Picture the scene - I'm sweating like a pig (a small pig but a damp and heated swine, nonetheless), waiting for J Mascis to walk back on stage with his pair of noisy mates at the Plymouth leg of the UK Rollercoaster tour in 1992 (just after the awful My Bloody Valentine and just before either Blur or Jesus and Mary Chain). Dinosaur Jr. have just played a rib-cage rendering version of their then hit, 'Start Choppin'' and the entire hall seriously DOESN'T want to let them go home without one more song. My ears are oozing blood (hypothetically speaking) and my eyes are full of sweat from leaping up and down like a twat for 40 minutes to the man Mascis - one more song. Just one.

The bastards never came back on and I ordered a double-stiff one thereafter. But what a gig.

Leap forward 18 years and you can now get to experience exactly what my poor lugs were being pummeled with because Dinosaur Jr. are back in the UK for half a dozen gotta-go-gigs in May. They start in Oxford on the 8th and continue to Liverpool (9th), across the Irish sea to Galway's Black Box on 10th and Vicar Street in Dublin on 11th, then back to the UK for Glasgow's ABC 2 (13th), Newcastle (14th), Leeds (15th), Birmingham (16th), Cambridge (17th) and the lovely Shepherd's Bush Empire on the 18th. Idaho's Built to Spill play support on the UK (and possibly Irish) leg of the tour.

Tickets start from £18 and go on sale in the morning (Thursday 25th Feb - Friday for the London date) and I wouldn't hang around to be frank.

Their last album, 'Farm', was a beautiful set of fiercely-loud anthems that ranked quite high up in many 'end-of-year' 2009 round-ups (including mine) yet an interesting problem occurred with the actual CD pressing causing no end of ironic confusion upon its release. Basically the first batch were incorrectly mastered and ended up being 3 decibels LOUDER than they should have been.

I therefore still ask the question - "...And the problem is what, exactly?".

It sure sounds crap on iTunes (what doesn't) but coming out of a pair of Bose, well I can't hear any difference - it sounds like a normal Dinosaur Jr. CD!

Happy clicking in the morning!