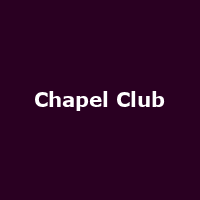 Fresh-faced newcomers to the London music scene, Chapel Club have announced a UK tour in support of their brand-new single 'O Maybe I', due to be released on Feb 22nd on download and 7". If you like intelligent yet moody guitar anthems, might well want to grab tickets for these dates. Their recent gigs have been well received and they are due to support The Futureheads and The Courteeners in Newcastle on March 4th - get there early to see them.

The new headline tour starts in April at the Eastney Cellars in Portsmouth on the 7th then continues up the A3 in Guildford on the 8th before continuing to Oxford, Cardiff and many more before landing in their hometown of London on May 27th for a gig at the art-space warehouse, Village Underground in fashionable Shoreditch. Most tickets are a tenner or under (even the London one).

The Shoreditch venue, incidentally, looks a cool place - an large Victorian warehouse with a few restored Tube trains stuck on the top (you can see them from Great Eastern St.) and loads of bands passing through its studio doors in the coming weeks, including New Young Pony Club (Apr 9th), Four Tet (Apr 10th AND May 30th) and the Rain Machine (Apr 12th), all at reasonable ticket prices.