A Question of Sport Live Provides All the Answers - Popular TV Quiz Hits the Road, Autumn 2010 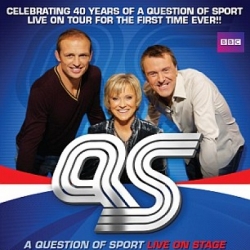 Right then Phil, it's the picture round next and what would you like?

In your dreams Tufnell, which number do you want?

(cue sounds of audience laughter and loads of nudge-nudge from Phil and Sue with other team captain, Matt Dawson honking violently into a bucket).

No you are not watching Carry On Quizzing, but instead it's the popular peak-time shenanigans of the sporting panel game, A Question Of Sport. But rather than sit at home watching the 30 minute edit on a box of pixels, how about seeing an extended version 'live' in an arena or theatre environment? Yes, sounds like a laugh doesn't it?

The live version will tour the UK in the autumn, starting in Birmingham on Oct 20th and continuing on for a total of 14 performances until Nov 16th at the Clyde Auditorium, Glasgow. Tickets go on sale on Friday 19th Feb and should cost from around £35 upwards.

The show has been a permanent fixture on BBC since 1968 - that's 42 years, making it the longest running quiz show on TV with around 900 shows under its belt. The format is simple - one quizmaster (Sue Barker, although previously it's been Stuart Hall, David Vine and David Coleman), two captains (currently rugby's all-dancing, all cooking Matt Dawson and cricket's cheeky scamp Phil Tufnell) and four guests divided between the two teams. The names of the rounds have almost become synonymous with everyday language including 'What Happened Next?', 'Home or Away?' and the infamous 'Picture Board'.

I'm wondering how they will present the 'Mystery Guest' round, myself.