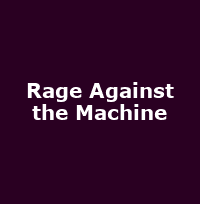 Unless you were on a three month visit to Jupiter at Christmas, you will be aware of the 'battle for the Christmas Number One'. A Facebook group successfully started a campaign to get 'Killing in the Name' by Rage Against the Machine to the coveted seasonal top-slot, instead of the usual X Factor clap-trap that normally occupies it. They succeeded of course and, at the time, the band showed gratitude by announcing that they would gladly play a free gig in the UK during 2010.

They have kept to their word. They will play a show at Finsbury Park in North London on June 6th. In order to attend the gig, you will need to register for tickets at (nice name chaps) www.theragefactor.co.uk first of all. You have until midnight on Sunday 14th Feb to log on, but be warned - the tickets are only going to be allocated on a 'lottery' basis, there is no guarantee you will automatically get a ticket and you will only be allocated a maximum of 2 per person. I imagine the band will personally garrote you if you try selling them on eBay afterwards, and rightly so. It's free. Gratis. Zilch. And to make sure it is YOU who registers and turns up, you need to upload a photo of yourself as well - your mug will then be printed directly onto the ticket. Nice one.

On Wednesday 17th Feb, the tickets will need to be claimed from the ticket agent using the registration code previously given to you by The Rage Factor website. It will then be a 'yay!' or a 'nay'. I wonder if Mr Cowell will try and get a ticket?...