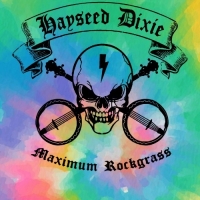 Kings of the hillbilly rock tribute acts (um, there can't be many of them), Hayseed Dixie, return to the live scene in the UK with a pretty intense tour due to start next weekend. They are not content with playing one UK and Ireland tour - the four-piece banjo-strumming trailblazers head off around Europe with Scandanavian dates featuring prominently, before heading back to our shores. Are they mad? Quite possibly, but they have a new album to promote so make up your own minds.

February 18th marks the start of the shenanigans when the band will play the first of four Southern Irish dates in Galway (Roisin Dubh), then on to Limerick (19th - Dolan's), Dublin (20th - Tripod) and finally cracking Cork (21st - Cyprus Avenue). Northern Ireland has the one date in Belfast at the Spring and Airbrake on the 22nd, before the trek across the sea to Scotland for half a dozen stops until March 1st (Edinburgh Picture House). Then the boys tour England from March 2nd (Newcastle) to 22nd (Wimbledon!) before the big European leg kicks in. They return to our shores on May 19th (Manchester) and a further eight dates straight afterwards until May 27th when they finish in Poole (Mr Kyps).

Tickets are on sale now at various prices - Ireland prices are around 17 while the UK prices vary from £14 upwards.

Hayseed Dixie have recently released 'Killer Grass', their 8th album, and it comes complete with the usual array of cover versions, delivered in inimitable style, including 'Bohemian Rhapsody' and 'Sabbath Bloody Sabbath'. Imagine how bizarre they're going to sound when performed in bluegrass style - and then click below for tickets. You know you want to.