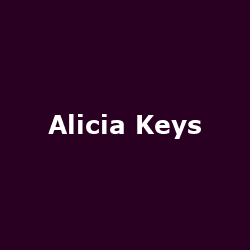 In keeping with a history of memorable and exciting Live collaborations, the UK record label's body, the BPI, today announce that Alicia Keys will perform with Jay-Z at the BRIT Awards with MasterCard on Tuesday 16 February 2010 at London's Earls Court Arena.

Having topped the UK album charts for the first time on Monday with her album 'The Element of Freedom' Alicia Keys will make a much-anticipated return to the BRITs stage where she last performed in 2004. She joins a superb line up of performers that include Lady Gaga, Jay-Z, Cheryl Cole, Lily Allen, Kasabian, JLS, Robbie Williams and the unique collaboration of Dizzee Rascal and Florence and the Machine.

Ged Doherty, Chairman of The BRITs Committee said: 'Alicia is a fantastic addition to the show. I can't wait to see her and Jay-Z perform one of the biggest songs of the year.'

The BRIT Awards 2010 with MasterCard will take place on Tuesday 16 February at London's Earls Court Arena and will be show LIVE on ITV1 from 8pm. The show will be hosted by funnyman Peter Kay with support from Dame Shirley Bassey, Idris Elba, Courtney Love, Cat Deeley and Andy Serkis who are just some of those presenting awards on the night.