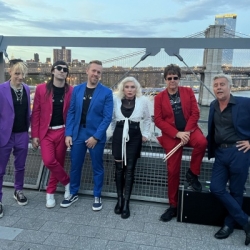 Led by iconic perennial Dad's favourite, Deborah Harry, Blondie will perform - appropriately enough - on Father's Day, Sunday June 20. It maybe thirty years or more since Harry's sultry, groundbreaking brand of post-punk caught the ears (and turned the heads) of audiences around the world but Blondie's pulling power has rarely diminished.

With global album sales of more than 40 million, a new record - their first for six years - is set to add to the total when released in the spring. Fans who make their way to a clearing in the Gloucestershire woods will be treated to some of the new material alongside a back catalogue of rare depth and quality.

Hits like 'Sunday Girl', 'Denis', 'Atomic', 'The Tide is High', 'Call Me', 'Hanging on The Telephone' and the (slightly) more recent number one smash 'Maria' are all set to feature and are all reminders of the bombshell that was Blondie and, in particular, Debbie Harry (as she was then).

The short skirts and punk ingénue shtick may have been left in the seventies and eighties but if you want to join some of the world's finest collection of trees and an even better collection of US post-punk pop classic; pack your waterproofs and get down to Westonbirt Arboretum the day before midsummer.