The Futureheads to Unleash Chaos for Spring 2010 UK Tour 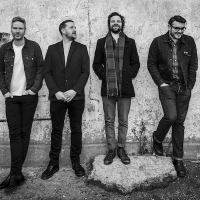 It seems these boys are not ready to 'skip to the end' just yet by the sound of things!...The Sunderland-based quartet, who go by the name of The Futureheads, are to return with her fourth LP, entitled 'The Chaos', due out on 26 April.

Hoping the album content does not do what it says on the tin, it's with open arms that we'll welcome the foursome back on stage as they have just announced a seven date tour, between 27th April and 12th May, which will see them chant their indie anthems in the cities of Nottingham, Leeds, Manchester, Birmingham, London, Bristol and Portsmouth.

Beforehand they will perform alongside the very likeable likes of Paul Weller, KT Tunstall, Bombay Bicycle Club, Reverend and The Makers and Magic Numbers for the Haiti Earthquake Fundraising event at the Roundhouse on 25th February, as well as with The Courtneneers and Chapel Club in Newcastle on 4th March.

Tickets for The Futureheads' Chaos tour go on sale this very Friday 12th February, at 9AM, costing Â£12.00 regionally and Â£14.00 in London, plus booking fee.