What a Spectacle! - Pere Ubu Urge You to Take a Look at Their February 2010 Stage Show 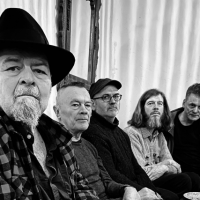 During our article on Lewisham's juicy Dirty South nuggets on display for all to see, I mentioned post-punk troubadours Pere Ubu at the end and their imminent gig at the Blackheath Halls on the 27th of Feb. In fact, David Thomas and 'his minions' (so goes the press sheet) are playing four more dates prior to the Halls one, one of which is a very special one-off at the Relentless Garage.

The other three dates are in a similar format to the Blackheath one, a spoof radio-play idea called 'The Spectacle', and these take in Glasgow's Classic Grand on Feb 20th, Bath's Komedia on the 23rd and the Leamington Spa Assembly Rooms on the 24th. The band all form the cast for the 'play', which centres around Thomas's despairing character, Pere Ubu himself (adapted from the band-name's origin, a play called 'Ubu Roi' by Alfred Jarry), beset with rage at his minions around him. It's rock, it's theatre, it's avant-garde and it's very Ubu to the core - their career has always been very expressive to say the least [check www.hearpen.com for a listen - Ed]. Tickets for the four Spectacle dates cost around Â£14.

The Relentless Garage date (Feb 25th) is a different kettle of sustainable salmon altogether - the band will perform their landmark debut album, 'The Modern Dance' (contains 'Non-Alignment Pact', 'Chinese Radiation' and 'Over My Head') as well as tracks from their recent 'Long Live Pere Ubu' from 2009. The show will be in a two-set format and tickets cost Â£17.50 (plus fees).