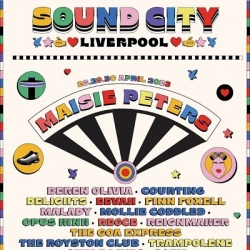 In tandem with our previous article about a call for local bands to participate, Liverpool Sound City have announced some of the big boys (or should I say girls?) for this year's headlining portion of the three-day shindig running from May 19th to 22nd.

Note that Early-Bird discounted tickets (£40 - see button below) end on Friday 5th February, the same day that individual tickets go on sale for the headliners below.

Mercury-Prize winner Speech Debelle and perky pop-pixie Paloma Faith will occupy the prime slots across the city, with Faith kick-starting the festival at the Philharmonic Hall with her gig on the 19th. You already know what this young lady can do - her debut album 'Do You Want The Truth Or Do You Want Something Beautiful?' stormed the charts upon its release in 2009, plus she added a bit of theatrical colour to festival appearances and sell-out shows.

Ms Debelle has wooed many a critic during the past couple of years, not least for her debut album released last year in May which contained a fusion of raw soul, rap and beats that belied her lack of previous breakthroughs. Despite the award, her label Big Dada (a smallish indie that concentrates mainly on traditional hip-hop and breaks - Roots Manuva did alright with them) failed to flood the shops with enough CDs to meet demand and she jumped ship. Her new album is out later this year and her festival gig is on the 21st at the O2 Academy, costing just a tenner.

Other bands to appear include Gold Panda at the Korova on the 21st, as well as Wave Pictures, Grovesnor and Hook and the Twin.

Other guests at Sound City include the head-honcho of the pioneering Sire Records label in the US, Seymour Stein giving a keynote speech with a very special guest. Sire started out in 1966 with a mixture of artists such as Small Faces and The Deviants before becoming a cutting-edge outlet for New Wave. Ramones, Talking Heads, Dead Boys and Depeche Mode have all come under the label's wing during the 70s and 80s. A certain blonde singer called Madonna did alright with them as well.