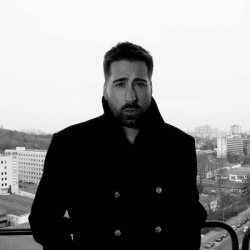 Celebrating the festival of love and romance in true twisted and theatrical style, The Irrepressibles present 'Mirror Mirror' as part of the St. Valentine's Day event on 14th February 2010 at the stunning Queen Elizabeth Hall on London's Southbank.

There will also be performances in the foyer from Cabaret artists, musicians and comedians Ryan Stiles, Jonny Woo, Empress Stah, Hooligan Night and Toy Toy. With Bourgeois and Maurice as main support in in the auditorium. Plus Broken Heart Djs.

Whether blissfully in love, bitterly scorned or looking for the one, this live performance spectacular promises to be visually and aurally captivating, with its conceptual set and teams of artists in film, dance, avant-garde costume and make-up.

Bringing to life the music from their debut album 'Mirror Mirror' The Irrepressibles will take the audience on a thrilling and awe-inspiring journey, led by composer and artist Jamie McDermott.

'Mirror Mirror' was released on 11th January 2010 on Major Record Label through V2/Cooperative. Fusing European orchestration with pop melodies and soaring cathartic vocals, it is a theatrical, playful and passionate album. From the dramatic opener 'My Friend Jo' to the galloping rhythms of 'Anvil' and the yearning echoes of 'Forget The Past', 'Mirror Mirror' is a superbly constructed sonic exploration of McDermott's confessional stories. Love, anger, lust and loss signpost the journey through The Irrepressibles' mystical and theatrical world.

The album this week received a 4 star review from allgigs writer Hannah Spencer, with her commenting:

'Mirror Mirror' is a wild and extravagant journey to a theatrical, flamboyant world of fairytale, nightmare and everything in between; elaborate Buckley-esque vocals soar over wonderfully dramatic, diverse orchestral arrangements as the ten-piece performance orchestra's drama unravels through a series of musical twists and turns.

But can they cut it live, I hear you ask? Well, their 'From the Circus to the Sea' EP release at St George's Church, Bloomsbury had allgigs' Charlotte Frearson in raptures, awarding it 5 stars and commenting:

One band, one film, one awesome venue, one awesome night! ...A truly surreal evening, orchestrated by a surreal and bohemian band. Who knows where they will play next? My money's on Highgate Cemetery.