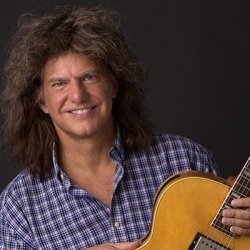 During my visit last night (to see Jan Garbarek - review to come) to the Barbican Centre, I was impressed by the forthcoming line-up at the City venue which is located near to Barbican and Moorgate tubes. As well as the main hall, there are other theatre spaces, a cinema and a gallery but it's the music we are concerned about here.

The cheap seats have long-gone for US jazz and rock guitarist Pat Metheny's date on Feb 10th but there are no more tickets available at face value. Here, he will be playing music from his latest solo work, 'Orchestrion' which is pretty bloody good I can reveal (review to come for that soon as well). It will be interesting to see him cover all instrumental bases of this work 'live'.

Later in February a performance entitled 'African Soul Rebels' offers up the protest-rhythms and vocals from Mali's Oumou Sangare, Afro-funk sensations Orchestre Poly-Rythmo (from Benin) and a name that I remember from the days of Recommended Records (Stockwell-based art-house and non-profit jazz, noise and scratch-label) Kalahari Surfers from South Africa who, until recent years, had to smuggle their sound tapes out of their home-country due to their volatile, confrontational and oppressive lyrical content - that was according to the government, in truth Kalahari Surfers told it like it was with thudding electro beats and beautiful melodies derived from both African and Folk sources. A real treat especially if they play anything from the acclaimed 'Sleep Armed' and 'Bigger Than Jesus' albums. Tickets range from £15 to £25.

A legend from the world of contemporary systems and minimal music (and thus has a foot-hold in pretty much every genre of dance and film-soundtrack music - repetitive cycles of sound without the beats), Philip Glass returns with 'Life - A Journey Through Time', a multimedia performance using an orchestra and National Geographic images with the usual pretty melodies often associated with the man who has released a raft of classical, opera and contemporary pieces over the past 40 odd years. Aphex Twin, S-Express and Pierce Turner are just a few of the artists who have utilized his skills on their output. £7 to £30.

Jazz returns in March in the form of local heroes, Portico Quartet who are still probably enjoying the plaudits for their stunning 2009 album 'Isla'. They do their spacey, moody thing on March 8th for £20 (plus fees) while Stephin Merritt brings his ever-growing pop/rock/bubblegum/psychedelia project, The Magnetic Fields, to the Barbican to promote his brand-new 'Realism' album. Again, tickets are pretty limited for the latter gig - check the link to see what you can get with our 5% discount offer.

Finally, World and Roots music takes over the venue for a welter of cracking gigs coming up later in the Spring. South African pianist and composer, Abdullah Ibrahim, will play a very special UK date on March 30th (£27.50), giving you the rare chance to see a man who has brought global attention and affection for his own brand of African-flavoured jazz. A real landmark, as indeed are the rest of the scheduled events.

Malian jazz/funk and rock singer-songwriter, Salif Keita brings his brand of griot music to the City on April 7th (£27.50) before the London Latin Music Festival (La Linea) takes place across the capital with two contrasting performances at the Barbican including a welcome return for the 'Tropical Gangster' and the queens of Ze, Kid Creole and The Coconuts (Apr 22nd - £15 upwards) and Mariachi El Bronx, the Central American sensation that couples guest vocalists and the sad yet soaring sound of horns, horns and more horns of the punk-band The Bronx in their alter-ego. Great fun and £15 upwards.

Did I mention Cesaria Evora, John McLaughlin, Angelique Kidjo, Caetano Veloso and the blues legends Robert Cray Band? I think I just did and we will look at these upcoming concerts in more detail in our next round-up. Meanwhile, tickets are up for grabs below.