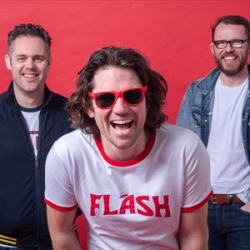 The crowd pleasing trio will back this release with a couple of February shows (Hatfield on 6th and London on 11th), before starting their tour proper in Ireland on 19th April at the Savoy Theatre in Cork. The Irish leg of the tour takes-in, Belfast, Limerick, Dublin and Castlebar before heading across the Irish Sea for the English leg of the tour, starting in Nottingham on 28th April, via the cities of Liverpool, Newcastle, Leeds, Manchester, Blackpool, Sheffield, Plymouth and London among others; two of which they will share the spotlight with Calvin Harris and Noisettes (at the Playaway Festival in Butlin, Skegness, on 16th April) and Alex Gardner (at the Nottingham Royal Concert Hall on 28th April).