Breathe the Ether in April 2010 with London Sinfonietta, Gil Scott-Heron, BEAK> and more 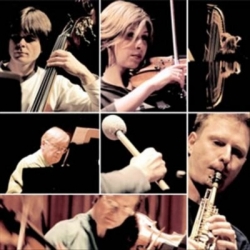 As one of three major music festivals hosted by the Southbank Centre (together with The Meltdown and Jazz Festivals, a bit later in the year), with the fulfilled ambition of being one of "innovation, art, technology and cross-arts experimentation", Ether is a magnet to lovers of all things non-mainstream.

This year again, after previous contributions by the likes of Radiohead Jonny Greenwood and Thom Yorke, Kraftwerk and Talking Head David Byrne, Ether '10 presents further unlikely or rather un-thought of combinations of musical wizards, giving the concept a go, for a week, between April 16th and 24th.

Composers Philip Glass, Mark-Anthony Turnage and Henryk Gorecki will battle it out via the London Philharmonic Orchestra on the 17th at the RFH. Same place, on 19th April, Lou Reed will be operating both processed and unprocessed guitars accompanied by Ulrich Krieger on tenor sax and Sarth Calhoun on conti-make that Lou Reed's Metal Machine Trio.

Another big-wig to follow on the 20th, in Gil Scott-Heron, whose new album, 'I'm New Here' is due out on 8th February, joined by 2009 Mercury Award winner and fellow rap-poetess Speech Debelle.

On the 21st, electro-acoustic Southbank Centre artist-in-residence Oliver Coates will take to the QEH, alongside the experimentalists of Broadcast (Warp records) and the classically-trained Mica Levi with her band Micachu and the Shapes. L.A art-rockers, Health and Chrome Hoof will join forces for a sonically and visually spectacular extravaganza on the 22nd.

Things will keep both visual and sonic as acclaimed music video film director, Chris Cunningham (responsible for some of Aphex Twin's best vids), will put together a montage of unreleased videos with a soundtrack of his own and remixed music, on the 23rd, along with Portishead man Geoff Barrow's side-project BEAK>.

Ether will draw to an end with a performance by fusion pianist Will Dutta with special guests Plaid, Max de Wardener and John Richards.