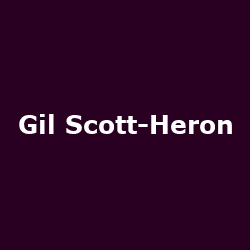 You can't keep a good man down so they say. Well I do at least. But it is certainly the case for soul legend Gil Scott-Heron. Not only has his new album 'I'm New Here' [released in the UK on 8th February - Ed] been critically acclaimed by many music journos but his upcoming single 'Me and the Devil' has been given Radio 1 approval by Zane Lowe, dubbing it his 'Hottest Record in the World' no less. Not bad for a 60 year old. [Check the video for 'Me and the Devil', above right - Ed]

And for fans and curious people alike, he is to showcase his distinctive brand of cool at the Royal Festival Hall, London on Tuesday 20th April. The new single is an absolute winner, and a real advance for a musical maverick that never stops tampering with his musical style. Tickets for the event (Â£25 + booking fee) go on sale Friday 29th January at 9am and cost Â£25, so get those fingers trained to click the link below when they go on the market.

And how does this sound? Subscribers to Gil Scott-Heron's mailing list will receive a free mp3! Head on over to www.gilscottheron.net for more info.