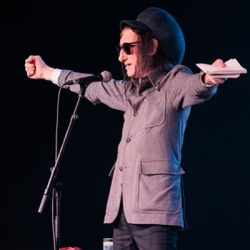 Outside the take-away Saturday night/ a bald adolescent asked me out for a fight/ he was no bigger than a two-penny fart/he was a deft exponent of the martial art. (Kung-fu International)

Like a death at a birthday party, you ruin all the fun/like a sucked and spat-out Smartie, you're no use to anyone (Twat)

John Cooper Clarke means a lot of things to a lot of people - spindly-legged stooge to the Honey Monster in the Sugar Puffs ads in the 80s being one that springs to mind (and one of the few reasons to watch adverts twenty years ago), but it's as a poet and a comedian that he is obviously recognized. But more of that later - he has some gigs coming up that you simply must go to.

There are a very limited amount of tickets left for Saturday's (Jan 30th) quip-fest with Timperley's scary-headed Frank Sidebottom at the Bloomsbury Theatre but, if you can't make it down for that one, he is playing a few more around the UK in the coming months. On Feb 12th he appears at the Leicester Musician (£14.50) before scooting back towards his home-turf of Salford, this time in Stockport at the Plaza (£16.50) on March 5th. A further date has been pencilled in for the Artix in Bromsgrove on April 24th (tickets on sale soon). He have recently entered his 61st year last week, but he still delivers plenty of gritty, urbane and dry-as-sand philosophy by way of the spoken-word.

So then, back to his career (of sorts). He made a quartet of engaging poem/music albums with Martin Hannett and Steve Hopkins during the Post-punk heyday ('78-'81), including the terrific 'Disguise In Love' and the compilation 'Me & My Big Mouth', the latter of which features the above two quoted poems delivered at 'live' scatter-gun speed. Although his last album, 'Zip Style Method', was released in 1982, he has contributed to a couple of recent Reverend and the Makers B-sides as well as being fawned over by Arctic Monkeys on the sleeve of the 'Flourescent Adolescent' CD (an exclusive poem no less). A new generation seems to have realized what a true legend he still is.

I'll close with one more quoted snippet that might make you think twice before stepping on that holiday-bound plane:

... when I came round, I was gagged and bound for Majorca/ And the eyes caressed the neat hostess with unapproachable flip-finesse/they've got little bags if you wanna make a mess/fancied Cuba but it cost me less to Majorca ... (Majorca)