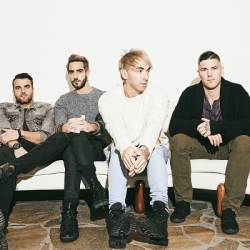 The hard-working, hard-touring quintet from London have recently toured with Lostprophets, Taking Back Sunday and Fightstar, as well as appearances at Download, Sonisphere and the Slam Dunk festivals in 2009.

Winter Kiss is the first new material to be released by the band since their 'Mirrors' EP (check the video on the right), which is now in its fourth pressing, having shifted over 4,000 copies. You can get your mitts on it for free from: www.tinyurl.com/winterkissdownload - in exchange for you email address.

Front-man Gustav Wood, talking about the single and making it freely available had this to say:

We wanted to release the new track as a free download-only single, because we wanted to give something back to those that have given us so much, it's the least we could do after such a great year.
The song is a little darker than people might have expected from us, both thematically and sonically. We wanted to push ourselves a bit creatively and explore things like strings and piano that we hadn't yet had time to. Without giving too much away, the song deals with the idea of feeling isolated, even if you may not actually be alone.