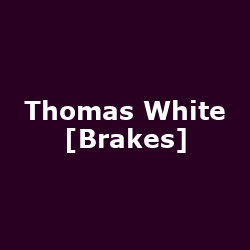 Thomas White will be previewing his sophomore solo album 'The Maximalist' with a free download of his new single, 'The Last Blast', taken off the album.

'The Last Blast' - "a dissection of the life and work of notorious World War II novelist Sven Hassel" according to Tom and features Phil Sumner of Actress Hands and British Sea Power on cornet - will be available from www.thomaswhiteonline.com for a two week period from 9am on January 21st.

An alternative version of 'The Last Blast' forms part of a three track EP available from March 1st with full track listing as follows:

The Maximalist - written, played and produced by Thomas White - is released on Cooking Vinyl on March 15th.

The album features twelve tracks of post-modern pop and marks his most complex and ambitious release to date. A founder member of Electric Soft Parade and Brakes, White has lent his considerable talents in a variety of bands from Patrick Wolf to British Sea Power to Sparks whilst still finding time to record two solo albums. The Maximalist is yet another fascinating progression for this most idiosyncratic of artists.