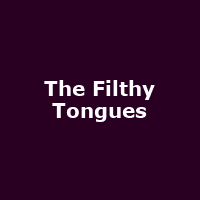 After the success of their debut album 'Addiction', Isa & the Filthy Tongues are now due to release their new album 'Dark Passenger' via Neon Tetra Records, available from 1st February.

Isa and Martin Metcalfe (Goodbye Mr McKenzie) lead the band and they are already getting rave reviews for their dark underground sound. There's little doubt that the guys in this band have spent years in dark places brewing up this smouldering batch of bitter edged, poison tinged, sonic assaults.

Stacey Chavis from Portland, Oregon came along to assume the role of Isa and provide the kind of cool, charismatic, rock 'n' roll grit 'n' spit vocals that have enabled them, together, to produce one tough mother of a record.

The band's 2009 single 'New Town killer' featured in NME magazine '10 Tracks You Must Hear' and the single signals an epic return to the UK music scene in what proved to be a hugely successful year. It's also the lead track from the film of the same name which features Dougray Scott and features the film's director fellow Scot Richard Jobson (the Skids) on vocals. The track received it's first UK play on Lauren Laverne's BBC 6 show last month and has since featured on Steve Lamacq's and Chris Hawkin's BBC 6 shows as well as Janice Long's Radio 2 show and Kerrang! Radio.

Armed with quite a history, the band plan a huge assault on the UK music landscape for 2010 which include the release of 'Dark Passenger' and a mass of new gigs.