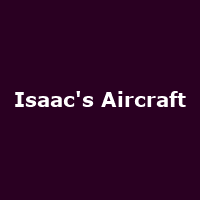 2010 sees the return of Cambridgeshire indie band Isaac's Aircraft with their new single "Head to the Feet", the follow up to "Friends and Foes" which saw them reach the Top 30 Indie Singles Chart on BBC Radio 1 in April 2009, alongside bands including Arctic Monkeys, Franz Ferdinand and Oasis. The single was produced by Paul Tipler, renowned for his work with Placebo and Idlewild, and Andy Rowland, which was mastered by the highly acclaimed Frank Arkwright, whose clients include Arcade Fire, The Killers and Bloc Party. "Head to the Feet" will be featured on the as-yet-untitled album, due for release in 2010, which features productions from LA-based McKay Garner and the aforementioned, Paul Tipler.

In November 2009, Isaac's Aircraft signed an artist development deal with USA based A&R Worldwide, whose portfolio boasts artists including Keane, Ting Tings, La Roux and Coldplay, to name but a few.

The success of the release lead to Isaac's Aircraft touring Europe in the Autumn of '09, receiving invites to headline prestigious music venues across the UK, including Cambridge's premier music venue The Junction, playing to a sell out crowd, Rhodes Arts Centre, The Watershed and Amy Winehouse's local, The Hawley Arms in London. As of late, they've also played alongside The Zutons and Fearless Vampire Killers. 2010 will see Isaac's Aircraft return to Europe, tour the USA and perform at a host of UK festival dates, with invites to play already flooding through.

Needless to say, the band, Zak (vocals and rhythm guitar), Martin (piano and keyboards), James (drums and percussion) and Calum (lead guitar), has come a long way since forming on the playground of their old 6th Form College in Cambridge. With heavy piano influences ranging from Philip Glass to The Arcade Fire, Isaac's Aircraft combine a concoction of piano driven rock and intricate lyrics, to create a truly refreshing and innovative new sound, appealing to Indie / Rock and non Indie / Rock fans alike.

In support of the release, Isaac's Aircraft are also giving "Steady On' as a free download, available from www.isaacsaircraft.com now, with a full, live DVD viewable online for free in the coming weeks. More information can be found at their website.