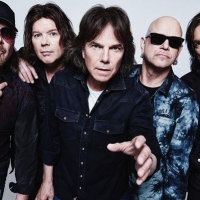 After the release of the band's critically acclaimed 2009 studio album 'Last Look At Eden', a triumphant headline appearance at Bloodstock Festival and a sold-out Classic Rock Awards show at the Islington Garage, 'Europe' are ready to take the UK by storm in 2010.

The band's forthcoming single, 'New Love In Town', released as a digital download on Monday February 8th, is currently playlisted on BBC Radio 2.