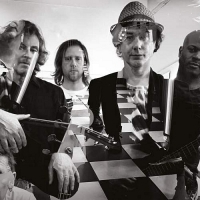 As the years advance and pull away from the 80s, now it seems as though the 80s are actually trying to catch us up again, some thirty years later (minus Thatcher thankfully). Loads of bands have either reformed for a brace of one-off gigs to remind us that we all should have liked them in the first place, or they have never disbanded in the first place but instead got dumped by their label, before skulking off to lick their wounds on a label that is only distributed out of a Transit on the A4.

The Woodentops fall into the former category though not entirely - they actually reformed in 2006 but, whatever, they are continuing their quest to be cherished once again with two dates earmarked for March. They play London's Tabernacle on the 5th and Manchester's Deaf Institute on the 6th for what promises to be an ecstatic pair of gigs if the recent appearance at the Royal Festival Hall is anything to go by.

So who are they and why should you go? Formed in 1983 in Sarf Lundun by Rolo McGinty (ex-Wild Swans), they sounded like a mixture of C-86 (before it became hyped in NME et al by a few years) bands like early Primal Scream and Bodines with a smattering of folkisms, rockabilly and electro. Debut single 'Plenty' was certainly a lightly-buttered slice of pop that started an almost unbroken run in the upper echelons of the Independent Singles charts for a few years. They had numerous highlights in their live sets including other singles like 'Move Me', 'It Will Come' and 'Everyday Living', but the real crossover (and a rather unlikely one) was with Paul Oakenfold's endorsement of the track 'Why?' from the live album 'Hypnobeat', a rousing stomper that got the remix treatment from him and Adrian Sherwood back in the day. It graced loads of Ibiza sets, normally as a closing anthem yet their label Rough Trade failed to capitalize on the success of the summer. Merging 'Indie' and 'Dance' eh kids? Certainly not a new thing nowadays.

Their big album is still 'Giant' from 1986 - its subtlety being its main weapon as well as really jolly songs. I even heard a couple of them being used on TV's 'Homes Under the Hammer' for gawd's sakes! You know you've crossed over when your song 'Everything Breaks' gets used for the bit where the plumbing goes wrong and the two presenters get rumbled in the shed. Allegedly. Enjoy the gigs!