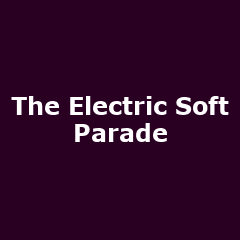 Its time for the great Mr White to comeback. No, not Jimmy 'Jungle' White but the multi-band front man Thomas White. Not content with full time stints with The Electric Soft Parade and Brakes mixed with occasional membership in Sparks he has been putting the finishing touches to his latest solo release, 'The Maximalist.'

The album, which has been described as bizarre post modern pop is due for release on March 15th and is sure to be another great addition to a truly original body of work. And to add the icing to this exciting news White has announced a few dates for showcasing the album. He is to play the Slaughtered Lamb on Jan 27th before playing The Prince Albert in his hometown Brighton the following night as well as returning to the same venues for consecutive night shows in February. With further dates expected to be added and the shows in London and Brighton as cheap as chips (well 3 portions of chips maybe) it really is set to be one of the most eclectic, exciting shows in 2010. Click the links below for ticket info/purchase details and keep your eyes on this site for further gig announcements.