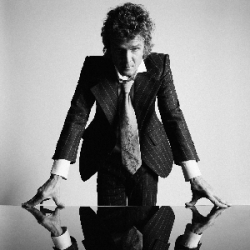 As The Raconteurs have been put on hold while the Jacks (White and Lawrence) are busy rocking in Dead Weather alongside Alison Mosshart of The Kills, Brendan Benson has regained his solo singer-songwriter cap. In August '09, Benson released his fourth studio album in 'My Old Familiar Friend' (perhaps a self-acknowledgement of his temporarily recovered status, in this title?), a fine cut of eleven tracks, which sees him return to the quirky power pop he had got us used to ever since his 1996 debut, 'One Mississippi'.

Produced by Gil Norton (Pixies, Foo Fighters, Feeder), 'My Old Familiar Friend' was recorded in 2007, in between The Raconteurs' two albums ('Broken Boy Soldiers' and 'Consolers of the Lonely', respectively released in 2006 and 2008). So, although it might already sound ancient to him, Benson will come and perform his new material in the UK, for three dates in March: 3rd in Glasgow, 4th in Manchester and 5th at London's Koko.

Tickets are on sale now, priced £15.00 for Glasgow and Manchester; add 2 pounds for the London date - all plus booking fee.