Robyn Hitchcock to Walk Like An Egyptian? New Tour Dates Announced for Spring 2010 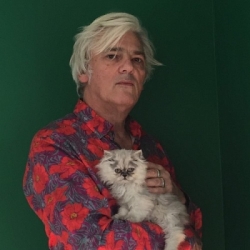 It's fair to say that Robyn Rowan Hitchcock has a special place in many a music fan's heart, either for his entire catalogue or for perhaps one or two songs at least. If you still haven't had your pants charmed off by one of England's true troubadours, maybe now is the time since the quirky treasure is out on tour again.

As Solange rightly observed a while back, Hitchcock is playing a series of Maritime gigs at the South Bank in celebration of his 2008 Disko Bay expedition - tickets are still available for the concert on Jan 30th, as well as his appearances at the Nick Drake-tribute gigs under the 'Way To Blue' banner on Jan 20th (Glasgow - Royal Concert Hall), 21st (Brighton - Dome), 22nd (Barbican, London) and 23rd (Warwick Arts - Coventry) - all £15 or thereabouts.

Hitchcock joined the new wave/post punk elite in 1976 with The Soft Boys, a cerebal mix of eccentricity and electricity that didn't grab the masses' attention but did become a spawning ground for like minded bands such as XTC, Monochrome Set and Wire. Anybody who composes songs entitled 'I Want To Be An Anglepoise Lamp', 'The Rat's Prayer' and 'School Dinner Blues' deserves a hug and a flask of hot tea but he moved on from being Soft to being sometimes solo and sometimes accompanied by The Egyptians. They recorded a welter of albums during a decade of almost-crossover potential (86-96), including the worthy trio of albums for A&M. As a pop-rock album, 'Perspex Island' is up there with the best of them being an amalgam of REM (early-sound), XTC (later-sound) and even Thomas Dolby (vocally).

Nowadays the requisite box sets have appeared as well as a new single in 2009 ('Surround Him With Love') - make sure you do the same when he treads the boards later this spring.