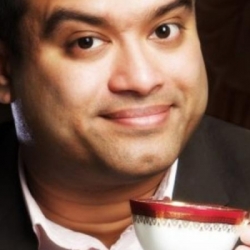 Cheeky shiny-domed London laughter-maker Lee Hurst (now that's a good old mouthful straight away) has been tickling Londoners under the chin and funny bones for a good while now, initially with his Backyard Comedy Club and now as 'Lee Hurst's Comedy Club' at the re-opened FymFyg Bar in Cambridge Heath, East London. Nationally he is known for his gangly build and sharp wit on 'They Think It's All Over', the BBC sports panel game show. He's a funny man - but then he should be, he gets paid for it! But his Comedy Club looks a good bet overall, especially with the decent prices being charged for a night out - other clubs take note.

On Thursday's Curry On Comedy nights, Greg Burns ('Have I Got News For You', 'The Office' and Capital Radio - Drivetime) introduces budding young and not-so-young comics such as Nathan Caton, Luke Benson, Max and Ivan and Paul Sinha (on Jan 14th) and Steve Williams, Maureen Younger, Erich McElroy & Markus Birdman (on Jan 21st). Basically each Thursday has a different line-up and, not only that, you get a curry included in the excellent Â£12 ticket price. They do a good Jalfrezi in the East End so gotta be worth a chuckle over chutney.

Friday's an invitation to Start The Weekend for just Â£10. This gets you 3 comedians and a guest MC, sometimes Mr Hurst himself. The 15th will feature Nik Coppin, Nathan Caton and Paul Sinha while the 22nd will showcase James Dowdeswell, Jeremy O'Donnell and Markus Birdman. As with the Thursday nights, Fridays will host new acts each week (though sometimes duplicating Thursday performers).

Saturday's Night Out feature Mr Hurst MC-ing on most nights and introducing 3 more acts as well as a late bar and the 'Cheese On Toast' disco, all for Â£12. Again, resident comedians will appear as well as new names, e.g. Feb 20th features Nick Revell, Tom Deacon and Dougie Dunlop. All the dates are listed below.

Lee Hurst is also playing occasional solo gigs at the venue - these tend to fall on the last Sunday of the month. His next performance takes centre-stage on Sunday 31st Jan and costs Â£12 - a cracking price for a top-notch comedian, especially in London.

Finally, the FymFyg gets feminine with the Girls With Guns night on Sunday 24th January. Not surprisingly, laughter comes from the ladies and for nearly half the price of other nights too. Â£6.50 gets you Ava Vidal (Michael MacIntyre, Best Of The Fest), Wendy Wason (Titty Bang Bang and Resurrecting Bill), Lady Carol, Tiffany Stevenson and a 'token TV bloke', Rob Rouse (Friday Night Project).