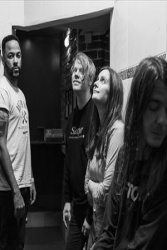 Johnny Foreigner never stop. Having recently clocked up a European tour with Sky Larkin, a Japanese tour, a UK tour and an Ireland tour, plus three festivals and godknowswhat else, they have just announced a series of February 2010 shows plus a freebie three-track download EP (available here: www.johnnyforeignerband.com).

The new six-stop 'Every Cloakroom Ever' UK tour begins on February 1st in Edinburgh, before heading to Manchester for February 2nd, Sheffield (3rd), Birmingham (5th), and Cardiff (6th) before a grandiose finish at the band's largest-ever headline show at King's College, London on February 7th.

Johnny Foreigner will also release a new single 'Every Cloakroom Ever' on limited edition 7" and digital formats on 8th February to coincide with the shows. Their sophomore album is available now.

Tickets for the new tour are a January sale-friendly Â£5-9, and are available right now!