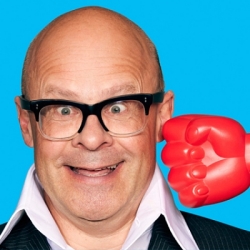 '...It may be Winter outside, but in my heart it's Spring', to quote an old disco song, - this is certainly how the staff at The Half Moon in Putney must be feeling after hearing the news that the live music venue will remain as such for the foreseeable future. Young's, who own the legendary place, have commendably backed down from a closure programme, under much public and industry pressure.

The lights were due to be switched off on January 31st but after petitions and support messages from the public and performers, plus a bit of conscience-prodding from The Musicians Union, South-West London will continue to benefit from some top gigs. This gives us a perfect excuse to give you a speedy round-up of what's coming to YOUR local venue - remember to use it or lose it.

Harry Hill, the crazy-collared, follicly-challenged 'Burpmeister', is set to play two sell-out dates at The Half Moon on January 12th and 13th. This is a chance to see the man return to his surreal stand-up roots and add to the reasons to be cheerful in Putney again. There may be cancellations on the night - otherwise, all gone I'm afraid!

However, the rest of the gig programme still has tickets available. Half Moon supporters and indie rock n rollers The Vibrants appear on Jan 14th (£5), soul legends Geno Washington and the Ram Jam Band pump up the brass on the 15th (£10), a rare acoustic set by Arno Carstens (of Springbok Nude Girls - he has a new album 'Wonderful Wild' out soon) on the 17th (£12), Squeeze songwriter, Chris Difford on the 25th (£10) and a spot of the Wonder Stuff in the form of Miles Hunt and cohort Erica Nockalls on the 26th (£10). Add in the already-mentioned The Producers super-group gig (Trevor Horn et al, 28th - £10) and a pair of beauties from The Hamsters (30th - usual set £12 and 31st - ZZ Top/Hendrix set £12, or £20 for both) and you have every reason to jump on the District Line and pop along!

Congrats to the Half Moon for staying open from all at Allgigs!