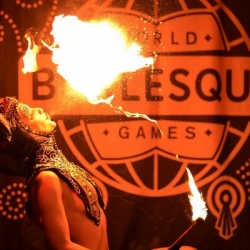 I guess the last thing you fancy doing right now in this weather, is whipping off your togs and parading around to glitzy music with tassles on your smarties and glitter on your thong. But that's what the hardened (easy now...) troubadours of the Burlesque scene are doing right now as they practice for the upcoming glamorous extravaganza later this year - London Burlesque Week 2010.

Yes indeedy, the capital will host the 4th annual 'tease-a-thon' at various venues from April 20th to 25th and it's set to be the biggest yet.

But before all that - how about a little sampler of what to expect, hmmm? On Saturday Feb 13th, the Bush Hall in Uxbridge Road (near Shepherd's Bush, aptly enough) will present a special pre-festival teaser. Your hosts will be Kiki Kaboom and Equador The Wizard and there will be one saucy show for £18.50 (4 hours). The evening is expected to be a mixture of traditional and neo-burlesque and is unsurprisingly for adults only.

And so to the big one (behave...) - the Week itself. It all strips off at the Cafe De Paris in Coventry Street on April 20th with an official opening gala (tickets are £16.50 to £24.50). The press will be there along with the entire cast of headlining lovelies doing the 'Red Carpet Strut'. There will be plenty of cabaret provided by other members of the 'cast' from around the world. The 21st sees the tour parade its wares at the classic Madame Jojo's with 'The Peepshow'. Cheeky strip-tease and equally saucy songs abound and all for £12.50 to £20.50. This show starts at 7pm and ends at 9pm, just enough time to leg it over to the Royal Vauxhall Tavern, Kennington Lane for a spot of Twisted Cabaret. This event stars the grotesque and the glamorous and will 'bend your senses and tickle your nightmares' - I thought X-Factor did that already! Anyway, this is probably much more fun than watching untalented cow-heads warbling to a Celine Dion backing-track. And it's £12.50 as well!

Further attractions continue with the 'Sexy Circus Sideshow' back at Bush Hall on the 22nd, starring an assortment of 'Carnival Hootchy Kootchy Vixens' performing sexy, crazy stunts. It runs for 4 hours and costs £16.50 to £29.50. How about becoming the next starlet? The Islington O2 Academy hosts the 'Battle Royale' where everyday people take to the stage in the most outrageous version of a talent show ever! Britain will certainly have talent on this night!

The final two events include the 'International Jetsetters Ball' at the Scala, Pentonville Road on the 24th, featuring global Burlesque stars (£18.50 to £34.50) and the VIP Closing Ceremony with Awards at the Cafe De Paris on the 25th (£18.50 to £34.50), a chance to see those who made it all possible.