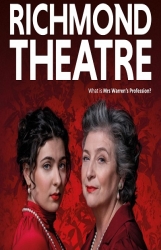 Having completed a well-received run of performances in the Malverns, Chichester and Richmond, you could be forgiven for thinking that this George Bernard Shaw play is all winsome and effete plummy accents and swishing skirts, tailored for the eyes and ears of anyone excited by the sight and smell of tweed and dead pheasants. But the subject matter is actually a little spicier than twee English gentrification of the classes - basically, forgive me for saying this, but the star of this show is a 'tart' and the play was banned back in it's gestating heyday (1890s).

Yes folks - Felicity Kendal ('Good Life' and 'Camomile Lawn') plays the part of Mrs Warren, a woman who by turns is a mother by day and a 'lady of ill-repute' by profession, usually at night. The story concerns her relationship with her prudish daughter, Vivie (Lucy Briggs-Owen), a duaghter who finds herself faced with the dilemma of becoming a law practitioner whilst her mum, ahem, 'earns' money in a more physical way. In Victorian days, prostitution was a far-cry from the open-plan market place found in Amsterdam (and Streatham, so I'm told) and Bernard Shaw saw his play axed pretty quickly.

So, does Vivie realise that her education was possibly funded by her mother's ability to utilise her talents in a profitable and pleasurable manner? You can find out at London's Comedy Theatre (Panton Street) from March 16th until June 19th with tickets on sale now at Â£20 to Â£48.50 (+ booking fee). There will be evening performances only.