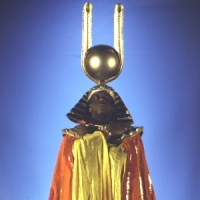 Certainly one of the more left-field yet respected jazz musicians and producers ever committed to stage and vinyl was Sun Ra (christened one Herman Poole Blount), who traversed many different embodiments of jazz during his 60-odd years in performance. He was also a poet, arranger and bandleader, most famously with the Solar Arkestra until his death in 1993. Superlatives can be a tiresome thing sometimes but the word 'seminal' and 'influential' certainly do apply to the composer who mixed psychedelia, funk, jazz and swing together through several 'phases' during his life.

His most celebrated New York-era works were briefly issued by the legendary Impulse! And ESP labels during the 60s and 70s before being rapidly deleted. The market has recently been flooded with re-issued copies of his 'Heliocentric World' series and 'Sun Ra & His Solar Arkestra Visits Planet Earth' as well as 'Cosmic Tones For Mental Therapy' and liaisons with Last Poets wizard, Pharoah Sanders. It is rumoured he had recorded over one hundred albums up to his death. He certainly tested the eardrums on a few occasions, successfully pushing the term 'improvisation' to extremes on some recordings. Then, by turns, he could orchestrate beautiful lullabies and 'swing' tunes to his heart's content.

Marshall Eaton joined the Arkestra in 1957 and has continued to fly the Sun Ra flag since the great man's demise with occasion live appearances. Now, in 2010, they return to London for a 3-day residency at the CafÃ© Oto in Dalston. The dates are April 12th, 13th and 14th and there are 3-day tickets available for Â£60 as well as single day passes for Â£22. Eaton was at the forefront of the sax-led pieces throughout the rein of Sun Ra so this should prove a treat for the free-jazzist ears out there.