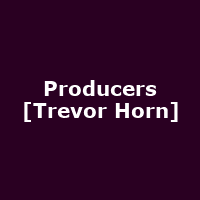 As you are well aware, the legendary South-West London pub-cum-venue, The Half Moon, may well be closing its doors as a live music destination at the end of January. As well as being a very sad state of affairs for a particularly 'dry' part of London, gig-wise, it marks the end of an era of tobacco-stained ceilings, sweat-soaked walls and lots of spit and pony-tailed rock legends treading the boards in our fair capital city.

However, it ain't closed yet as a new gig just announced will hopefully prove. The Producers may well evoke memories of Mel Brooks' 1968 comedy, but cast your mind some 10 years later when a certain Trevor Horn was flashing his red-rimmed bottle-bottoms and tight zoot-suit all over Top Of The Pops with a song called 'Video Killed The Radio Star'. Who would have thought The Buggles would spawn a producing monster like Trev? The man has crafted pop classics as a producer ever since - Frankie Goes t Hollywood, Grace Jones, Art Of Noise (pretty much anybody on ZTT in fact) and Robbie Williams have all been given the Horn (so to speak) over the past two decades.

Now Horn, along with partnering engineers and musicians, Steve Lipson and Lol CrÃ¨me as well as session drummer maestro, Ash Soan and songwriter to the stars, Chris Braide, has decided to bring the super-group The Producers to the Half Moon for a special one-off date on January 28th. Expect a set that could well include a spot of Frankie, 10cc, Grace and Buggles plus a few originals. In the true spirit of the venue, the ticket price is a bargain at just Â£10.

There may be trouble ahead, as the old song goes, but with the added incentive of 'special guests' appearing on the night, you may well witness another landmark night at the fully-functioning Putney pub. Keep it 'live' and get your tickets now!