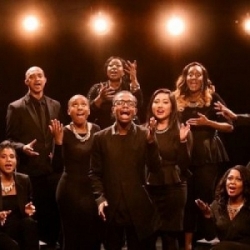 The London Community Gospel Choir, will be sharing their Christmas songs and good vibes at the London Jazz Cafe, Camden next week. The acclaimed choir have announced a quartet of concerts designed to help you get all joyful and triumphant starting on Monday 21st December until Christmas Eve inclusive.

The LCGC formed in 1982 as a one-off project for a concert, but the ensemble has continued to impress with their energetic and joyous performances. A TV appearance on Channel Four's 'Black On Black' series proved the final straw - musicians just had to hire them and record with them from then on. Paul McCartney, Elton John, Nick Cave, Razorlight and Gorillaz have all utilised their talents on numerous albums and singles. Their style is far beyond backing up rock singers though - jazz, nu-soul and swingbeat have all been performed by the choir as well as worshipful gospel.

For the Jazz Cafe concerts, the LCGC turn their attentions to the joy and significance of Christmas. Hallelujah indeed.