The Brian Jonestown Massacre Wonder 'Who Killed Sgt. Pepper?' and Hit the UK in May 2010 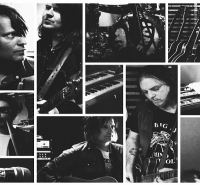 DiG! anti-hero Anton Newcombe and his bunch of merry nutters (affectionate mention...) are putting the final touches to their eleventh studio album, entitled 'Who Killed Sgt Pepper?', due out on 22nd January '10.

The notorious 60s nostalgists/ revivalists (a vain attempt at avoiding the neo-psychedelic label on my part) will support their new release with a European tour, which will stop by the UK and Ireland in May. The collective have announced six dates so far and will play London Shepherd's Bush Empire on the 14th, Birmingham Academy 2 (16th), Manchester Academy 2 & 3 (17th), Glasgow ABC (18th), Belfast Spring & Airbrake (19th) and Dublin Academy on the 20th May.

This year, the most part of which they spent on the road, the prolific combo, newly rejoined by Lennon-lookalike guitarist Matt Hollywood, released two EPs: 'Smoking Acid' and 'One'.

Tickets for their May tour are on sale now, and cost around Â£14.00 for all dates, except London, which is Â£17.00 plus booking fee.