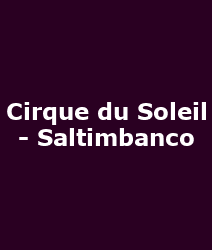 The award-winning performance and arts circus, Cirque Du Soleil, return to the UK with their fabulous 'Saltimbanco' show on tour next year. This time, the multi-talented troupe will perform in several cities from the spring to the autumn as part of a European series of arena dates.

Tickets went on sale last week, priced between Â£40 and Â£50, depending on location.

'Saltimbanco' (translated means, 'jump onto a bench') is a trademark CDS show and mixes acrobatic circus performance with the heady story about citizens living and working together in a buzzing urban metropolis. Acts include juggling, trapeze, bicycles, bungees and Chinese poles (and a nervous insurance company looking on, I imagine!) as well as a myriad of colour and music, the latter a veritable cassoulet of French, Spanish, African and operatics.

CDS are also performing 'Varekai' (meaning 'wherever') at the Royal Albert Hall from Jan 6th to 24th next year. This is the tale of magical forests and fantasy creatures, encapsulated in a world of dance and theatrics.