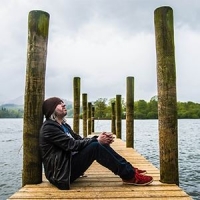 Damon Gough is no new-comer to soundtracks - the tea-cosyed one also produced 'About A Boy' in 2002, spawning the hit single, 'Silent Sigh' in the process. Now the Badly Drawn Boy is back with a new album purely devoted to another drama production, this time 'The Fattest Man In Britain'.

The new production has been written by Caroline Aherne (Royal Family) and stars Timothy Spall and Bobby Ball in a bittersweet tale about a Rochdale man, house-bound and neglected for 23 years, who meets a community-service kid and realizes there is more to life than shoving packets of jaffa cakes in his gob. Actually, I can't think of anything better than that, apart from doing a poo in Jedward's dressing room (just after a curry). Anyhow, the whole thing is propelled by the soundtrack in a poignant style, and screens on ITV1 this Sunday at 9PM.

The soundtrack features Damon performing tracks from, and inspired by the programme itself and is subtitled, 'Is There Nothing We Could Do?' and was released this week on Monday Dec 14th. Why not pick up a copy and ensure bloody Susan Boyle-on-the-arse gets knocked off, sales-wise I mean.