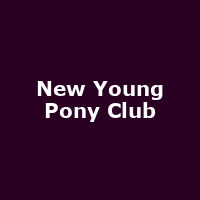 While we thought they'd joined the oh-so wide circle of failed one-hit-wonders, New Young Pony Club return with a follow-up to their 2007 debut album, Fantastic Playroom, in 'The Optimist'.

And optimistic indeed we are and wishing them well with this new opus, slated for 1st March'10, which they will back it up with an 11-gig tour kicking-off at Portsmouth's Wedgewood Rooms on 15th March, via Birmingham Academy on 16th March, Bristol Thekla on the 17th, Oxford Academy on the 18th, Manchester's Moho Live on the 20th, the Leeds Cockpit on the 21st, Nottingham Stealth on the 22nd, Glasgow King Tuts on the 23rd, Newcastle Academy on the 25th, Liverpool Korova on the 26th and Cambridge Junction on the 27th. The album launch will take place in London on 22nd February, at Islington Academy, as part of the NME Shockwaves 2010.

In the meantime, the first single off The Optimist, 'Lost a Girl', will be available on free download from their website (www.newyounpnyclub.com), today, Monday 14 December only, don't miss out!

Tickets for their tour cost approximately Â£13.00 for all dates, except for their London gig, which is Â£14.25, plus booking fee - on sale now.