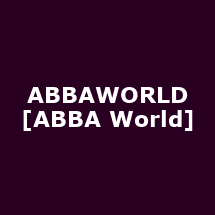 Fancy attending an interactive exhibition devoted to one of the most successful and much-loved pop groups of all time? Forget Take That and Westlife, ABBA are still serious business some 36 years after their initial appearance on the Eurovision Song Contest, winning with the sparky and jaunty 'Waterloo'. Hit-after-hit-after-hit followed and everyone seemed to have at least one ABBA favourite (even me - I plumped for the miserable 'The Day Before You Came') [the year is just not happy or new if it doesn't start with 'Happy New Year' - Ed]. You now have the chance to relive the phenomena from Scandinavia with ABBAWorld!

Earl's Court has been selected as the venue for the world premiere for this major event devoted to Agnetha, Frida, Bjorn and Benny, all having given their blessing. The event will run from January 27th to March 28th and tickets are now on sale, starting at Â£19.50 - so what is in store for your money, money, money [that's enough! - Ed]?.

There are 25 rooms to visit, each containing rare memorabilia, photographs, footage, music and other never-before seen archive material. There is also the 3D Interactive singalong attraction called 'Perform With Abba', allowing visitors to strut, dance and wiggle alongside their heroes, as well as sing the hits of course. There is also the Tretow MIX Challenge, an opportunity to recreate and remix the ABBA sound, along with a quiz, singalong and sleeve/video interaction as well. Any interactive activity can be recorded and later downloaded from the website as a continual reminder of your day out.

This is a truly unique experience and ABBA fans will bloody love it. How about buying that special person a Christmas ticket that lasts longer than just Dec 25th?

Now then, what are the chances of them opening XTCWorld, hmmm??