Phoenix Rise from the Ashes with Exclusive Roundhouse Gig, March 2010 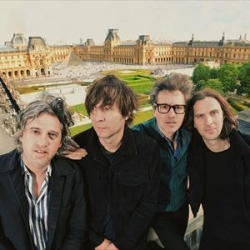 French alt-rock 'n soul band, Phoenix, have announced a one-off London date in March 2010. The live performance forms part of a European tour and will be their sole UK date next year (well, until they announce another one of course).

The gig will take place on March 29th at the Roundhouse, Chalk Farm. Tickets have just gone on sale and cost £18.50 plus fees.

Phoenix were formed in Versailles in the late 90s and provided backing on one of Air's early mixes of 'Kelly Watch the Stairs'. In 2000 they released their debut album, 'United' to critical acclaim despite sounding occasionally like Supertramp and The Eagles (less so now!). Have a listen to biggest hit, 'Too Young' for proof (the song also appeared in the movie, 'Lost In Translation').

In 2009, the band released the album 'Wolfgang Amadeus Phoenix' to mainly positive reviews, resulting in a Grammy nomination for Best Alternative Album of 2009.