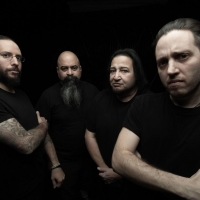 Los Angeles power-metallers Fear Factory, return to the UK in 2010 with a short set of dates confirmed for February. The band have also reconciled their difference between ex-members and completed a new album for release around the same time.

The dates are February 16th at Manchester's Academy 2, Wolverhampton Wulfrun Civic on the 17th, Glasgow's Garage on the 18th and lastly, London's Camden Ballroom on the 19th.

Fear Factory were formed in 1989 by vocalist Burton C Bell and guitarist Dino Cazares and released their debut album, 'Concrete', in 1991. Their early sound was likened to Godflesh and Napalm Death (mind you the songs were certainly longer), although the 'Demanufacture'/'Remanufacture' albums lurched away from the traditional, to the sampled-laden tendencies of Front Line Assembly and the EBM movement - plus the heaviest of guitars still resident in the mix, of course. Lately the band's original duo have had their disagreements and a continuation seemed unlikely. Not so....

FF now have a new album on the horizon, entitled 'Mechanize', due for release on February 8th. Rhys Fulber (Front Line Assembly / Intermix) has assisted on drum tracks and the full line-up are back on course to deliver an intense, ear-splittingly delicious quartet of performances.