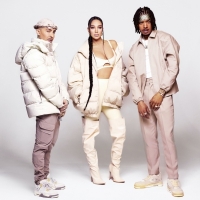 Fresh from embarking on their 'Christmas Party Tour' two weeks ago (until 14th December), the three time MOBO Award-winning Camden hip-hop trio has just announced dates for the spring.

Dappy, his sister Tulisa and best mate Fazer will play ten dates as part of their 'Against All Odds' tour, starting on 31st March 2010, to support their second album of the same name released last month, starting in Leas Cliff Hall in Kent on 31st March, via the cities of Ipswich, Derby, Newcastle, Leeds, Birmingham, Liverpool, Manchester, Sheffield, Reading, Plymouth, Cardiff, London, Bournemouth and finally (currently) Leicester at the De Montfort Hall on 20th April 2010.

'Against All Odds' features guest appearances by Mr Hudson and grimers Wiley and Chipmunk, as well as a songwriting partnership with Take That's main man (until Robbie re-joins them, that is) Gary Barlow on 'No One Knows'.