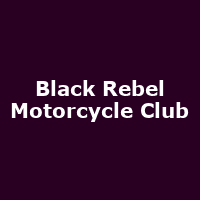 Strap on your leathers and rev up your Honda - the Black Rebel Motorcycle Club are about to do a wheelie through your town during April 2010 (well, provided you happen to live in one of the following destinations).

BRMC have confirmed nine UK dates as part of an extensive world tour next year and tickets will go on sale on Friday 4th December at 9am. Prices are Â£15 (Â£18.50 for London) + booking fee.

The San Fran foursome will be supporting their forthcoming new album, 'Beat The Devil's Tattoo', due for release on March 8th. The 12-tracker will be their first full-length album on their own Abstract Dragon label, although they have previously issued an instrumental collection called 'The Effects Of 333'.

The band have opted to leave major labels behind for the time being for whatever reason but Virgin and RCA gave BRMC a foot up at least. Crowd pleasers from their first four albums include "Love Burns", "Stop" and "Ain't No Easy Way" and these will no doubt get a run-out during the tour.