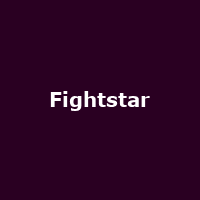 Charlie Simpson hasn't done too badly since he busted himself out of Busted - three hit singles and three hit albums have sat his band Fightstar on a modest pedestal, and their music is a damn sight better than the hapless pop band he used to front.

Their enthusiasm for live dates returns with a very special acoustic date at Northampton's Picture Drome on December 13th. Renditions minus the electrics will include tracks from their recent album, 'Be Human', which is due to be repackaged and extended in February 2010. Tickets cost Â£15.

The band will then pick up their usual instruments and play a host of dates in the New Year starting on Monday 8th February at the Millenium Theatre in Cardiff. The tour continues to Brighton (Concorde 2 - 9th), Wolverhampton (Wulfrun Civic - 10th), Sheffield (Corporation - 12th), Edinburgh (Studio 24 - 13th), Liverpool (Academy 2 - 14th), Norwich (Waterfront - 16th) and London's Heaven on the 17th.