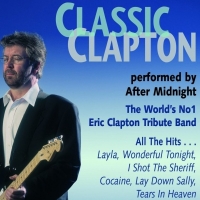 Classic Clapton, the World's No1 Eric Clapton Tribute Band featuring front-man Mike Hall, will be undertaking a 25th Anniversary Tour throughout the UK during 2010. The tour begins at Mansfield Palace Theatre on 26 February.

The band was formed in 1985 in Newcastle upon Tyne long before the term "tribute band" was invented, and named themselves 'After Midnight' after the JJ Cale song which gave Eric his first solo hit. Their ability to re-create Clapton's electrifying stage performances really caught the audience's imagination. In guitar/vocalist Mike Hall, the band possesses a front man who not only looks like Eric, he sings and plays guitar like him too!

The Band has released three albums. Firstly 'The Music Of Eric Clapton' contains cover-versions of 17 Clapton Classics. Their second album is a live double CD 'Classic Clapton Unplugged' recorded at Belfast Waterfront Hall. In 2005 they released their third album 'Classic Cream' - featuring 20 covers of songs by the sixties supergroup. All three albums will be available for purchase at their concerts.

Classic Clapton comprises 4 excellent musicians:- Founder members Mike Hall (lead vocals/guitar) and Vince Mason (drums). John Forster (bass guitar/backing vocals) played in a band with John Miles when they were both up & coming musicians. On keyboards/backing vocals is Paul Warren who is an experienced and talented jazz musician.

Eric Clapton's recent tours unfortunately have visited only a limited number of UK venues (mainly arenas). If fans want to hear all of his hits played live in more intimate surroundings, they really should attend a Classic Clapton concert. They will be performing authentic versions of all the Clapton Classics including Crossroads, Sunshine of Your Love, Hideaway, Key to the Highway, Hoochie Coochie Man, Cocaine and of course Layla!

The whole of Clapton's illustrious career will be covered including The Bluesbreakers, Cream, The Yardbirds, Derek & The Dominos and the solo years. There will even be an 'UNPLUGGED' segment. Nearly two hours of Classic Clapton!