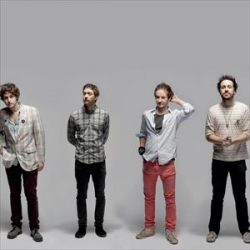 As previously reported by our very own Queen Solange back in May, Shed Seven are poised to embark on a long-haul across the land to give you a bit of good old 90s Britpop in the shape of "Chasing Rainbows", "Going For Gold" and "Getting Better". But, until this weekend, several of their dates were a bit lacking on the support-slot front. That's all been remedied with the inclusion of big Brit-hitters, The Holloways on nine nights.

The cheeky young Londoners have just recently released their cheery album, 'No Smoke, No Mirrors' which has been warmly received by fans and critics alike (although I didn't go a bundle on it). This is a real coup for the boys since Shed Seven will pack them out at the following dates where the Holloways support: Sheffield (11th), Birmingham (12th), Bristol (13th), Norwich (14th), Oxford (16th), Portsmouth (17th), the two Forum gigs in London (18/19th) and finally the first Leeds date out of two on the 21st December. Please note that support on all other dates is from either The Hungry Ghosts or The Shakinouts.